Going back a long time when we were more obsessed with surviving and not having the latest Michael Kors bag we use to cook these crockpot stews all the time. Come to think of it the only thing that has changed is the need for the bag.

Crockpot recipes have become almost as popular lately and for pretty much the same reason. They are fashionable and you can put almost anything in them while concealing your true self. I know - most of you are disagreeing with me on that but hey, facts have never been lies and the truth hurts.

Anyway - I'm not here to have a catfight about your hidden self but rather to show you how to cook something über tasty with minimal washing up and hopefully somewhere down the line you realise that this crockpot stew is a fraction of the price of that bag and it gave you a lot more joy.

So why write just another crockpot recipe? Simple. This one is different from the rest and it tastes completely unique. We start off by embracing our heritage of cooking with fire. Yes, fire.

Not gas or fan assisted ovens or induction but good a good old fire. You know - those things that used to keep us warm in the cold snowy nights and served as our entertainment before YouTube and Facebook came along.

You do not have to use fire, but it will really make it special as the food slowly takes up a smoky flavour from the fire. If you do not have a place for a fire just cook it in the oven and you will still get a great product.

A small while ago I visited a place very secluded in a Russian forest that had small wooden houses as accommodation and warmed by these old wood-fired ovens. As a chef, I could not help myself but try to cook something in this. I found an old clay pot in the house that I'm sure was only meant for decoration but that was not going to hold me back. I washed off the dust and lit up the fire. The heat in the wooden house befriended with some local vodka was the warmest cosiest thing I have ever felt since leaving the womb of my creator. And I have to say mama also cooks a killer crockpot on the fire.

Equipped with nostalgia from childhood crock pots, open fires and a hand full of local Russian ingredients I seised the moment, chopped up my stuff and chucked them into the dust-free ceramic pot with a bottle of beer and a mug of water. Into the fire, it went and six hours later after some ice fishing and more vodka, my crockpot was ready to be enjoyed in true medieval style. 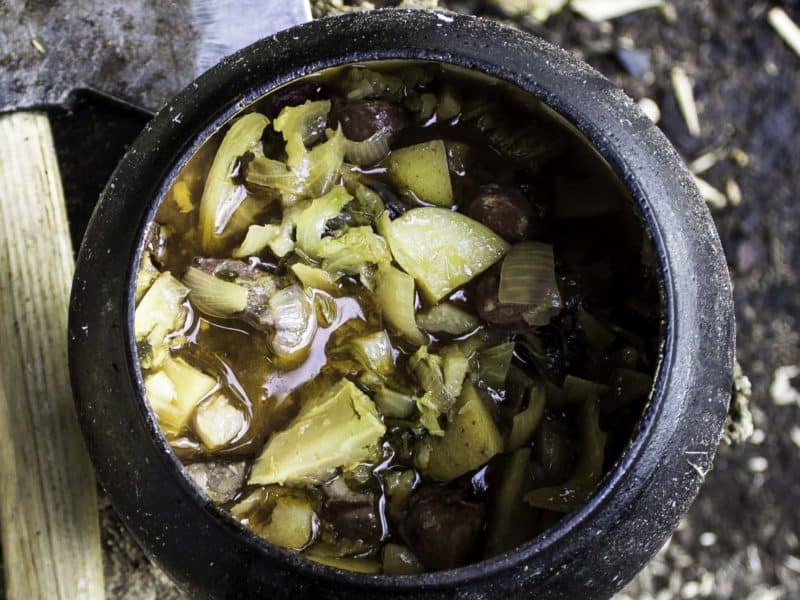 This is a super easy recipe and method but play around with timings and heat as no fire is the same. Don't forget to keep the fire burning by adding some wood every now and again. Happy cooking

* Percent Daily Values are based on a 2,000 calorie diet. Your daily values may be higher or lower depending on your calorie needs.